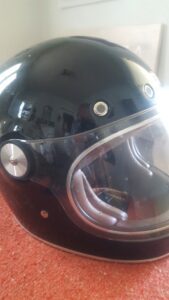 Since 1977, Colorado motorcycle riders aged 18 and over are not legally required to wear a helmet.  Motorcycle riders, operators, and passengers who are under age 18 must wear a DOT approved motorcycle helmet.

There is not a helmet requirement for bicycle riders in Colorado.  So adult riders of motorcycles and bicycles have a choice of wearing a helmet as they choose.  While we recommend wearing an appropriate helmet when riding on the road or trails, we do not cast judgment on individual choices.

Should you wear a helmet in Colorado and what about accidents and injuries in Colorado?

In making a decision to wear a helmet or not, consider some of the data. More than 5,500 motorcycle riders died in 2020 on U.S. roads, and over 180,000 were treated in emergency rooms for injuries.  The CDC claimed that helmets saved about 1,900 lives in 2017.  While not all injuries are to the head, according to the CDC helmets reduce the risk of head injury by 69%.

A Short History of Colorado Helmet Use

While there was a law in Colorado requiring helmets for people on motorcycles from about 1963 to 1977, now motorcycles riders age 18 and over now have freedom to choose whether they want to wear a helmet or not.  The Colorado Legislature repealed Colorado’s motorcycle helmet law in 1977.  Before the repeal there was the 1970 Supreme Court of Colorado case of Love v. Bell, and the Colorado Motorcycle Association, a Colorado Non-Profit Corporation, 465 P.2d 118, 171 Colo. 2.  In that case, the defendants started a class action lawsuit in the Denver District Court seeking a declaratory judgment concerning the constitutionality of C.R.S.1963, 13--5--159, enacted by the 1968 General Assembly (commonly known as the Motorcycle Helmet Law), and seeking temporary and permanent relief from enforcement of that statute.  At the time, C.R.S.1963, 13--5--159, which appears in Colorado Session Laws, p. 146 (1968), provided in part:

'No person shall operate any motorcycle or motor-driven cycle on any public highway in this state unless such person and any passenger thereon is wearing securely fastened on his head a protective helmet designed to deflect blows, resist penetration, and spread the force of impact; * * *'

At the trial on the issues, the plaintiffs presented no evidence whatsoever. The defendants offered several documents statistics about the injuries in crashes on  motorcycles by drivers wearing helmets as compared to those with drivers not wearing helmets. At the end of the trial, the district court ruled that the intent of the Colorado Legislature in passing the legislation in question was to prevent motorcyclists from sustaining serious head injuries, and that the legislation was designed to protect only that certain class of individuals who operate or are passengers on motorcycles. For this reason, the trial judge ruled that the helmet statute did not relate to the health and welfare of the citizens of Colorado in general, and was, therefore, an unconstitutional exercise of the police power of the state. The court entered judgment ordering that the state be permanently enjoined from enforcing that portion of the statute relating to the requirement of wearing a helmet. The court upheld as constitutional the portion of the statute requiring operators of motorcycles [171 Colo. 31] and passengers thereon to wear a face shield, goggles, or safety glasses.  Love v. Bell, 465 P.2d 118, 171 Colo. 27 (Colo. 1970)

The American Motorcyclist Association, for example, strongly encourages motorcyclists to use protective gear including helmets, but still opposes legal statutes requiring riders to wear them.  The Motorcycle Association believes that adults should have the right to decide when and where to wear a helmet.  In contrast, the Colorado Department of Transportation cites on its website, although helmets reduce injuries and save lives,  motorcycle and bicycle riders age 18 and over are not required to wear helmets in Colorado. 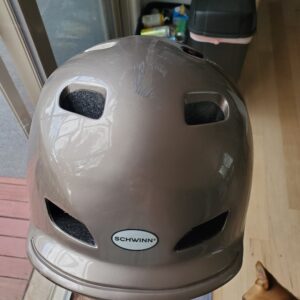 There is an interesting contrast with safety devices for car drivers and those riding e-bikes, regular bikes and motorcycles.  For legal purposes when making a claim for injuries, damages and losses, Colorado admits evidence an injured plaintiff not wearing a seatbelt which is a violation of the state’s seatbelt law as evidence to support the reduction of the pain and suffering or “noneconomic” damages.  So the failure to comply with the seatbelt law is admissible in court for someone hurt in a motor vehicle accident and who seeks in any subsequent litigation to recover damages for injuries resulting from the crash.  Fortunately, there is no similar reduction available where an injured person, or plaintiff in a lawsuit, was not wearing a helmet while operating a motorcycle, bicycle, or scooter.  Courts have rule that it is inadmissible for the defense to try and tell the jury about an injured person not wearing a helmet.  Of course, riders aged 18 and over are not required to wear helmets in Colorado, but those under 18 do need to wear a helmet under Colorado law.  The Colorado Supreme Court justified the ruling and explained a wrongdoer, careless driver, or defendant should not benefit in a crash because the rider chose not to wear a helmet.  While regulation of motorcycles is a part of Colorado’s police power, helmet use is not but a motorcycle endorsement is required.

What is needed to operate or drive a motorcycle in Colorado

Driver’s License is generally required for motorcycles to be used on the roadways of Colorado and operator needs to show that the person is proficient is operating motorcycle.  However, there are some exceptions in C.R.S. Section 42-2-103 as follows:

(e) The driver of a motorcycle need not obtain a two- or three-wheel motorcycle endorsement if the motorcycle has:

(II) A maximum design speed of twenty-five miles per hour or less;

(III) A windshield; and

(b) No low-power scooter shall be operated on any interstate system as described in section 43-2-101 (2), C.R.S., except where a bicycle may be operated on such interstate system, on any limited-access road of the state highway system as described in section 43-2-101 (1), C.R.S., or on any sidewalk, unless such operation is specifically designated. Low-power scooters may be operated upon roadways, except as provided in this section, and in bicycle lanes included within such roadways.

If you are injured in a motorcycle, scooter, e-bike or bike crash, please call or email us for how to proceed before talking to the insurance companies or discussing if you were or were not wearing a helmet.