Bicycle Lanes and the Debate Over Why We Should Have Them 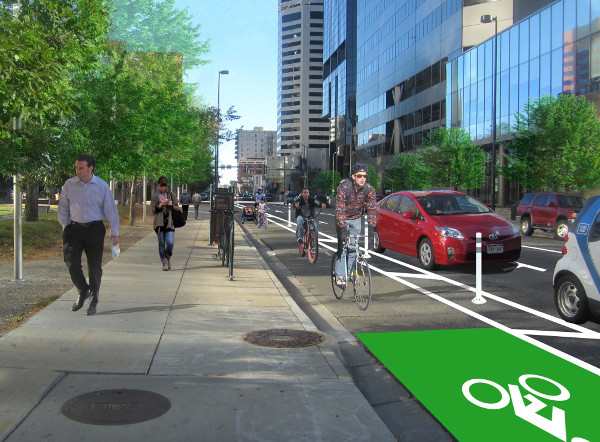 Most road users in Colorado have likely noticed clearly marked bicycle lanes on the sides of streets and the shared bicycle lanes. Both are marked with a bicycle symbol, green box, arrow, or signage as shown in the attached pictures. Studies have shown that marked bicycle lanes not only make cyclists feel safer, they actually are safer. However, legally speaking, we do not yet have a definition in Colorado for the bicycle lanes and how they intersect with the roads and vehicle traffic. We see crashes at the points of intersection of bicycle lanes and public roads, and there may be a dispute as to who has the right of way. Contact brian@weiss.law or call 303-741-0249 if you know about any crashes involving bicycle lanes as we are still studying crashes and are considering legislation that may clarify the law in this regard.

Bicycle-friendly towns like Boulder and Ft. Collins started the trend to developing extensive bike lane networks since the 1970s and more recently large cities such as Denver, Colorado Springs, Tucson, Chicago, Houston, Philadelphia, Portland, and Seattle have begun to add bike lanes on their streets as a way of encouraging bicycle use and decreasing car traffic. These cities have also promoted bicycle commuting events such as “Ride to Work Day.”

In general, bicycle lanes should always be:

Cyclists and motorists often have arguments and disagreements overuse of the roads, and bicycle lanes are yet another topic that fuels debate. All of us, as a cycling community, can make ourselves safer and better respected by following the rules of the road and being courteous to other users. This is one of the main goals of Bike Law Colorado. We feel that competent cyclists politely cooperate with other drivers by yielding when required, riding in the marked bicycle lanes, sharing the road, choosing the correct lane at intersections, and following the same traffic laws as motorists. When it comes to the arguments with selfish drivers, the cautious cyclist should be ready with a thoughtful response. Here are some examples that we submit to you.