How to legally roll through a stop sign safely in Colorado 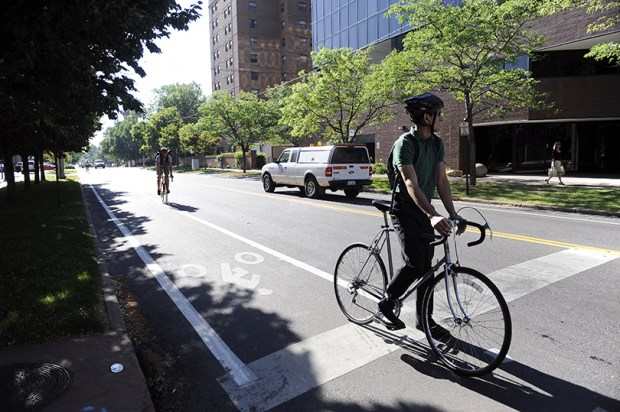 Disclaimer: This is not legal advice and bicyclists should become familiar with local laws where they ride as laws regarding the “Safety Stop” and other bike laws vary throughout Colorado.

The Colorado legislature passed a “Safety Stop” law in 2018 where bicyclists are no longer required to come to a complete stop at stop signs. This law applies only to stop signs, no red lights, but there is a new twist for red lights that we explain below. This “Idaho Stop” law is similar to the law in Idaho, as well as Aspen and Summit County, Colorado. A State-wide effort at passing this law was attempted during the 2017 General Session but was struck down for the fear it would cause injuries and confusion. However, the 2018 version (even though we like it) is more confusing than the 2017 version because it is up to local authorities if they want to adopt the law. The reasons for the passage of this law are to encourage bicycling and to lessen bicycle crashes. It can be tiresome losing your momentum to stop at each stop sign and the new law will allow bike riders to clear out of intersections before traffic arrives. Unlike driving a vehicle, a bicyclist has a much better perspective of what is around him or her. A bicyclist can also hear what is around him or her with fewer distractions of vehicle occupants. In Idaho, the bike law passing is thought to have decreased bicycle-vehicle collisions by 14%.

Rather than setting a specific speed, the Colorado legislature simply states that it must be “reasonable.” The state has largely left the decision to implement the law to local communities. The default reasonable speed is 15 MPH. However, 15 MPH may be unreasonably slow or fast, so municipalities may pass local ordinances to require slowing to 10 MPH, or allowing as much as 20 MPH. When the speed considered to be reasonable is altered, signage indicating the speed must accompany the stop sign.

So how do you safely roll through a stop sign at 15 MPH on a bike? The first step is always to be alert and we recommend not listening to music or podcasts in both ears. You may be able to sense the signs that a car is moving in an area you cannot see from the noise its tires make on the ground. These days, electric vehicles are becoming more common and you cannot expect to always hear the engine, which may be audile despite having earphones in. Also, earphones make it more difficult to focus on your form on a bike. So much about biking is anticipating where to place your feet, how to maneuver your body weight, and whether you should be feathering your brakes to get to a precise speed to take a corner safely. If you are just starting out, do not use earphones. If you are an experienced rider, still take out your earphones – it could save a life.

The second step is to keep your head on a swivel at all times; look at nothing in particular, but see everything. Think of where you are most likely to collide with something and look there, then to the next place, and so on. Look for cars and pedestrians, but also be aware that unanticipated obstacles may be moving into your bike paths, such as an off-leash dog, a pedestrian on an electric scooter, or another bicyclist.

The third is to use your legs to hold your body above your bike rather than remaining seated. When a rider is hovering slightly over their seat, the rider takes on a much more reactive form and can more quickly whip the bike to the side, deal with an unseen pothole, or slam on the brakes without going over the handlebars. The key is to be ready to lean as far back as possible to counteract the possibility of stopping too quickly, especially if the bike is equipped with hydraulic disc brakes. A full stop at 15 MPH can easily send the rider onto the pavement face first when they get bucked off their seat.

Fourth, signal your intention to turn and be loud if there are people nearby who may step out into traffic. While it takes practice to hover above your seat with only one arm on the handlebar, try and get your left arm to signal either right or, especially, when you are turning left. Regulations require bicyclists to signal within 100 feet of turning. Bicyclists must also yield to pedestrians, but not those who abruptly enter traffic.

The fifth and final step is to ALWAYS go behind vehicles that are moving rather than in front of them, even if they are only idling forward and are making eye contact. Never assume you have the right of way at a stop sign intersection because you do not if you are rolling through.

The “Safety Stop” law passing is a major step toward creating a more bike-friendly environment on the streets of Colorado. However, the law is new and motorists may not be aware of it so best to always be alert. We suggest that each bicyclist know where the “Safety Stop” law is in effect before rolling through any stop signs. Be respectful towards pedestrians, scooter riders and other vehicles so that, as the law’s passing becomes more common-place, it is not a source of contention drivers have with bicyclists.

(3) THE ADOPTION OF AN ORDINANCE OR RESOLUTION IN ACCORDANCE WITH THIS SECTION DOES NOT DIMINISH OR ALTER THE AUTHORITY OF THE DEPARTMENT OF TRANSPORTATION OR THE STATE TRANSPORTATION COMMISSION AS THOSE ENTITIES ARE DEFINED IN SECTION 43-1-102 REGARDING THE DEPARTMENT’S OR COMMISSION’§ AUTHORITY TO REGULATE MOTOR VEHICLE TRAFFIC ON ANY PORTION OF THE STATE HIGHWAY SYSTEM AS DEFINED IN SECTION 43-2-101 (1).